Suresh Raina Wiki, Age, Height, Salary, Wife, Biography: Suresh Raina Real Name is Suresh Kumar Raina.He was born on (27-November-1986) in Muradnagar, Ghaziabad, Uttar Pradesh, India.Suresh Raina is an Indian Cricketer.He is a Left-Handed batsman and part-time off-spinner.He made his ODI debut Against Srilanka on (29-July-2005), T20I debut against South Africa on(1-December-2006), and Test debut against Srilanka on (26-July-2010).Raina made crucial contributions to Team India with the bat during Quarter-Final and Semi-Final in “World Cup(2011)“.Raina is Best known for shorter formats of the game, He has the ability to adopt any type of circumstances during his batting and explode when needed.In IPL he played for Chennai super kings for the span of eight years(2008-2015) and after he joined Gujarat Lions for the period of (2016-2017).An Interesting thing about Raina is that he is the first Indian Cricketer to score the Centuries in all format of the play and also, first Indian player to score more than 6000 runs in T20I Career. 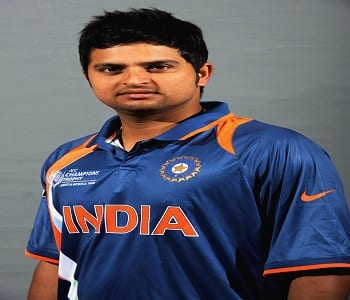