Nitin Gadkari Wiki, Age, Height, Weight, Occupation: Nitin Jairam Gadkari was born on 27th-May-1957 in Nagpur, Maharashtra, India.He is an eminent Indian Politician who works for “Bharatiya Janata Party“.Gadkari had been appointed as a Minister for “Road Transport And Highways(2014-till now), Shipping And Water Resources, River Development, And Ganga Rejuvenation(Sep2017till now)“.He started his Carrer by joining Akhil Bharatiya Vidyarthi Parishad(ABVP) in the year 1976, the student wing of BJP, In 1978, He became the Secretary for Vidarbha region.During the year 1981, He was appointed as city president of Bharatiya Janata Yuva Morcha(BJYM).He was appointed as a member of Legislative Council From graduates’ Constituency in the year 1990.During the span of (1995-1999), He was the PWD Minister in Maharashtra Government.Gadkari has retained his MLC Seat three times in the years{1996,2002, and 2008}elections. In the year 2004, BJP Appointed him as a State Unit President.Gadkari was also given a position of Bharatiya Janata party president.In 2014 election, He contested for Loaksabha Seat from Nagpur and won in that election.

Nitin Gadkari Father Name is “Jairam Ramchandra Gadkari” who is a farmer and his Mother Name is “Bhanutai Gadkari“.His highest Education qualification is M.COM, L.L.B, and Diploma in Business Managment.

He married “Kanchan Gadkari”, His son’s names are Nikhil Gadkari and Sarang Gadkari.His Daughter name is Ketki.His Salary is 50,000 per month.Net worth 15 crores as in 2014.Also, Read Vikram, Pawan Kalyan, Kajal Aggarwal, and Mahesh Bhatt Biography. 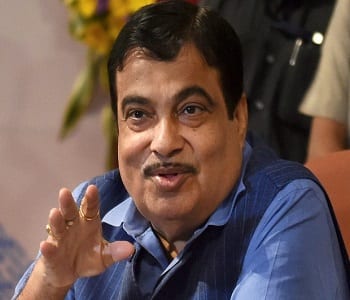 Related Topics:Nitin Gadkari Wiki
Up Next